The energy complex has been a challenging space in which to invest given oil prices and concerns about climate change and environmental, social, governance (ESG) investing. It seems recently that theme is being tapped into by others increasingly. Is it driven by genuine concern, public relations, or the upcoming election with changes in policy? Perhaps by all of the above.

In the Wall Street Journal, Blackrock (BLK) just announced taking a tougher stance against corporations on climate risk disclosure, including its own funds and practices. Toward that goal, the firm will pull back from thermal coal producers by the mid 2020s, add more sustainability investment products and double their ETFs numbering up to 150 that address ESG challenges.

In The Economist, a foremost ESG investor, Jeremy Grantham, concluded that investors should forego oil stocks.(1) Pension funds aren’t so sure they can afford to drop these stocks for fear of losing out on returns. To exhibit data about omitting energy stocks in a portfolio, synthetic portfolios were created that omitted 10 broad stock market sectors. Between 1989 and 2017, the S&P index returned an average of 9.71% annually, when excluding energy stocks the return was 9.74%. Even calculating this comparison further back, the spread between best and worst portfolios was 0.54% and omitting energy stocks produced a negligible difference. This has more to do with the market pricing stocks and broad industry groups over time. 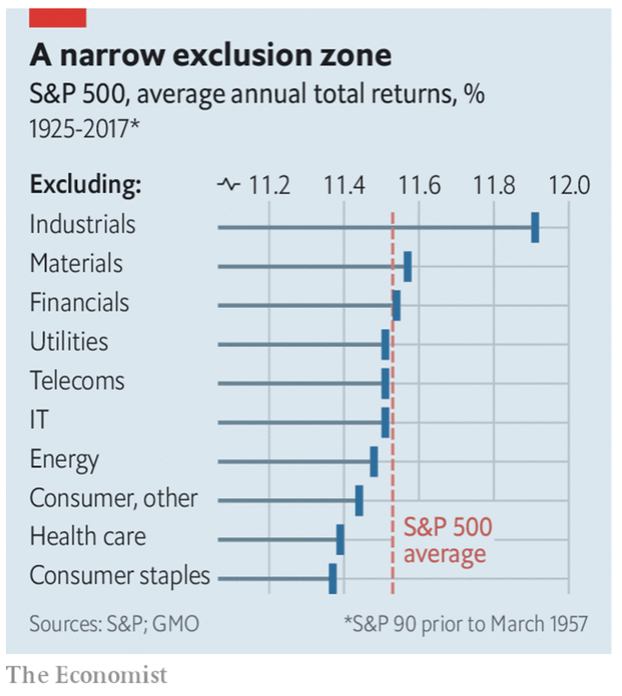 There are many dividend-paying energy and/or oil and gas-focused stocks that investors depend upon such as Chevron (CVX), Exxon Mobil (XOM), BP (BP), Total (TOT) and Occidental Petroleum (OXY). This is where picking a select energy stock based on an individual’s goals and needs comes into play, rather than by industry. Otherwise, it makes sense to invest in a broad index like the S&P (SPY), according to the chart above.

In Exxon Mobil’s 2019 Energy Outlook, they included the following chart. In any scenario in which a 2-degree Celsius case is the target, considerable investment in oil is needed to 2040. 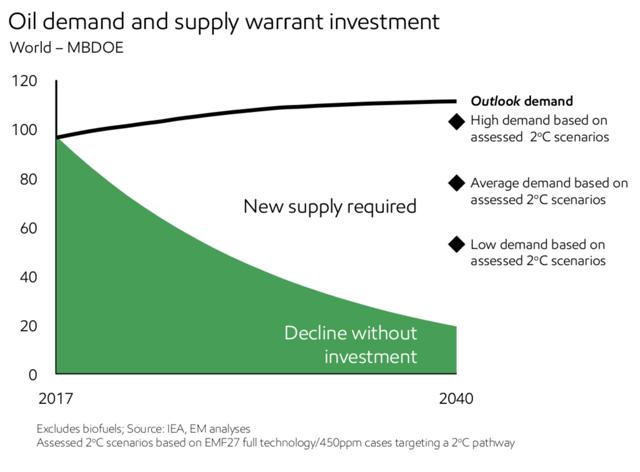 In their report, Exxon cited:

The world will be investing in oil and gas alongside all other sources to supply an energy-thirsty globe. At some point, oil and gas supply and demand more closely align. With Saudi Arabia via Saudi Aramco (ARMCO) now playing by slightly different rules, the important swing producer may begin to alter its practices. Across the world, costs to produce oil and gas will likely rise over time for various reasons.

The timeline of the transition to lower carbon energy is what matters to the investor. The decreasing of oil and gas demand (the peak) and the supply, which will adjust at some price level, are the two variables from an economic and marketing pricing standpoint. There’s also the prospects of majors and larger, incumbent firms shifting with the transition in a deeper way. And they are slowly shifting, such as Occidental with its carbon capture projects, and Exxon Mobil, with liquid fuels like algae commercialization and other energy efficiency measures within its vast energy operations.

There are mixed views about the role of natural gas in power generation, according to Exxon’s presentation below. The International Energy Agency (IEA) NPS is their new policy scenario of business as usual in a carbon-constrained world. The SDS projection is a rapid transformation toward a sustainable development scenario. 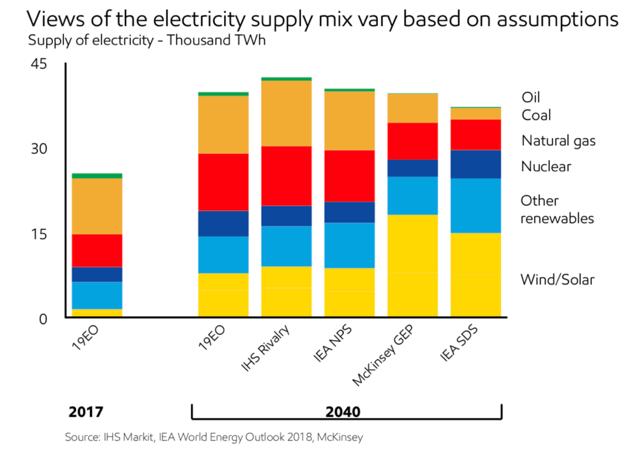 The growth of renewables and natural gas stem from developing economies, such as India, China and others. 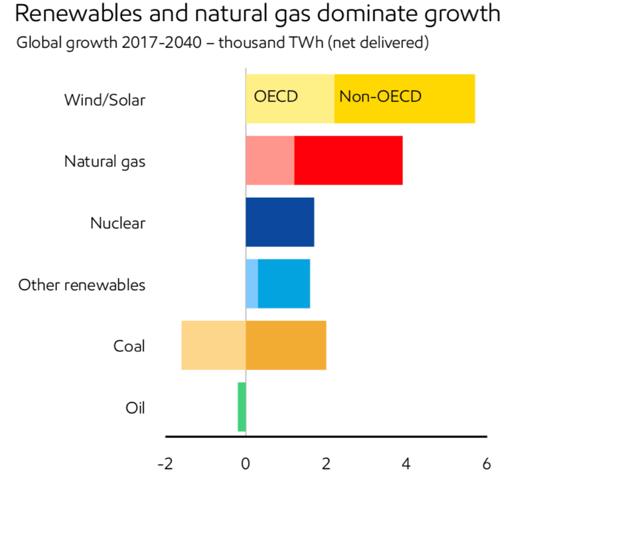 This is Exxon’s projection of global energy, with their business model and products faring favorably in the next two decades. 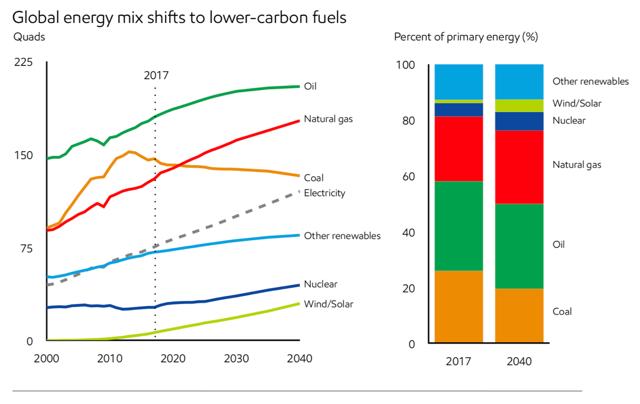 I do not doubt that drivers of an energy transition from policy (public pressure) and the benefits of lower carbon energy with its innovations connected to it will continue. A serious economic downturn could slow the process of transition in some low-carbon domains but the trend is mainstream. Alternative energy sources, if you want to call them that, are increasing in price competitiveness. Increasingly, the large- and medium-cap energy firms will solidify and mature their positions with respect to ESG principles. There’s ample room in the field to find one’s distinctive advantages. The most dynamic aspect is the environmental component. Firms will need to identify their strengths and cultivate partnerships among themselves to scale and invest in low-carbon projects, like Oxy and Total in carbon capture, and with synergistic “alternatives” firms.

The timing of the transition is challenging to identify but the fundamentals still apply. Uncertainty in the economic climate, geopolitical risks as of late, and perceptions of energy stocks (sentiment) have conspired. Hence a diversified but targeted energy portfolio that embraces sustainable energy-focused firms like Hannon Armstrong (HASI) alongside incumbent energy players with favorable ESG practices seems a sensible approach.

Disclosure: I am/we are long XOM, OXY. I wrote this article myself, and it expresses my own opinions. I am not receiving compensation for it (other than from Seeking Alpha). I have no business relationship with any company whose stock is mentioned in this article.

The content on any of The theamericaninvestordaily.com.com websites, products or communication is for educational purposes only. Nothing in its products, services, or communications shall be construed as a solicitation and/or recommendation to buy or sell a security. Trading stocks, options and other securities involves risk. The risk of loss in trading securities can be substantial. The risk involved with trading stocks, options and other securities is not suitable for all investors. Prior to buying or selling an option, an investor must evaluate his/her own personal financial situation and consider all relevant risk factors. See: Characteristics and Risks of Standardized Options.

The information presented in this site is not intended to be used as the sole basis of any investment decisions, nor should it be construed as advice designed to meet the investment needs of any particular investor. Nothing in our research constitutes legal, accounting or tax advice or individually tailored investment advice. Our research is prepared for general circulation and has been prepared without regard to the individual financial circumstances and objectives of persons who receive or obtain access to it. Our research is based on sources that we believe to be reliable. However, we do not make any representation or warranty, expressed or implied, as to the accuracy of our research, the completeness, or correctness or make any guarantee or other promise as to any results that may be obtained from using our research. To the maximum extent permitted by law, neither we, any of our affiliates, nor any other person, shall have any liability whatsoever to any person for any loss or expense, whether direct, indirect, consequential, incidental or otherwise, arising from or relating in any way to any use of or reliance on our research or the information contained therein. Some discussions contain forward looking statements which are based on current expectations and differences can be expected. All of our research, including the estimates, opinions and information contained therein, reflects our judgment as of the publication or other dissemination date of the research and is subject to change without notice. Further, we expressly disclaim any responsibility to update such research. Investing involves substantial risk. Past performance is not a guarantee of future results, and a loss of original capital may occur. No one receiving or accessing our research should make any investment decision without first consulting his or her own personal financial advisor and conducting his or her own research and due diligence, including carefully reviewing any applicable prospectuses, press releases, reports and other public filings of the issuer of any securities being considered. None of the information presented should be construed as an offer to sell or buy any particular security. As always, use your best judgment when investing.

Disclaimer: Past performance is no guarantee of future performance. This product is for educational purposes only. Practical application of the products herein are at your own risk and The theamericaninvestordaily.com.com, its partners, representatives and employees assume no responsibility or liability for any use or mis-use of the product. Please contact your financial advisor for specific financial advice tailored to your personal circumstances. Any trades shown are hypothetical example and do not represent actual trades. Actual results may differ. Nothing here in constitutes a recommendation respecting the particular security illustrated.